Recently, I travelled through Vietnam. While I was in Hue, the cultural capital of Vietnam, a weird thought raced through my mind, “Can I get Tintin in Vietnamese?”

Before coming to Hue, I was in Ha Noi and stayed in the Old Quarters. I explored the entire place on foot but did not come across any bookshops. Also, I wasn’t actively looking for one. Instead, I was busy soaking in the amazing nightlife of Old Quarters on a weekend.

In Hue, right beside the Perfume River, en route to the Forbidden City, I came across a big store that belonged to PNC, a large book and stationary chain in Vietnam. I explored the aisles and found a lot of translated manga titles, most notably – Dragon Ball, Detective Conan and Doraemon. There were a few native Vietnamese titles, too. 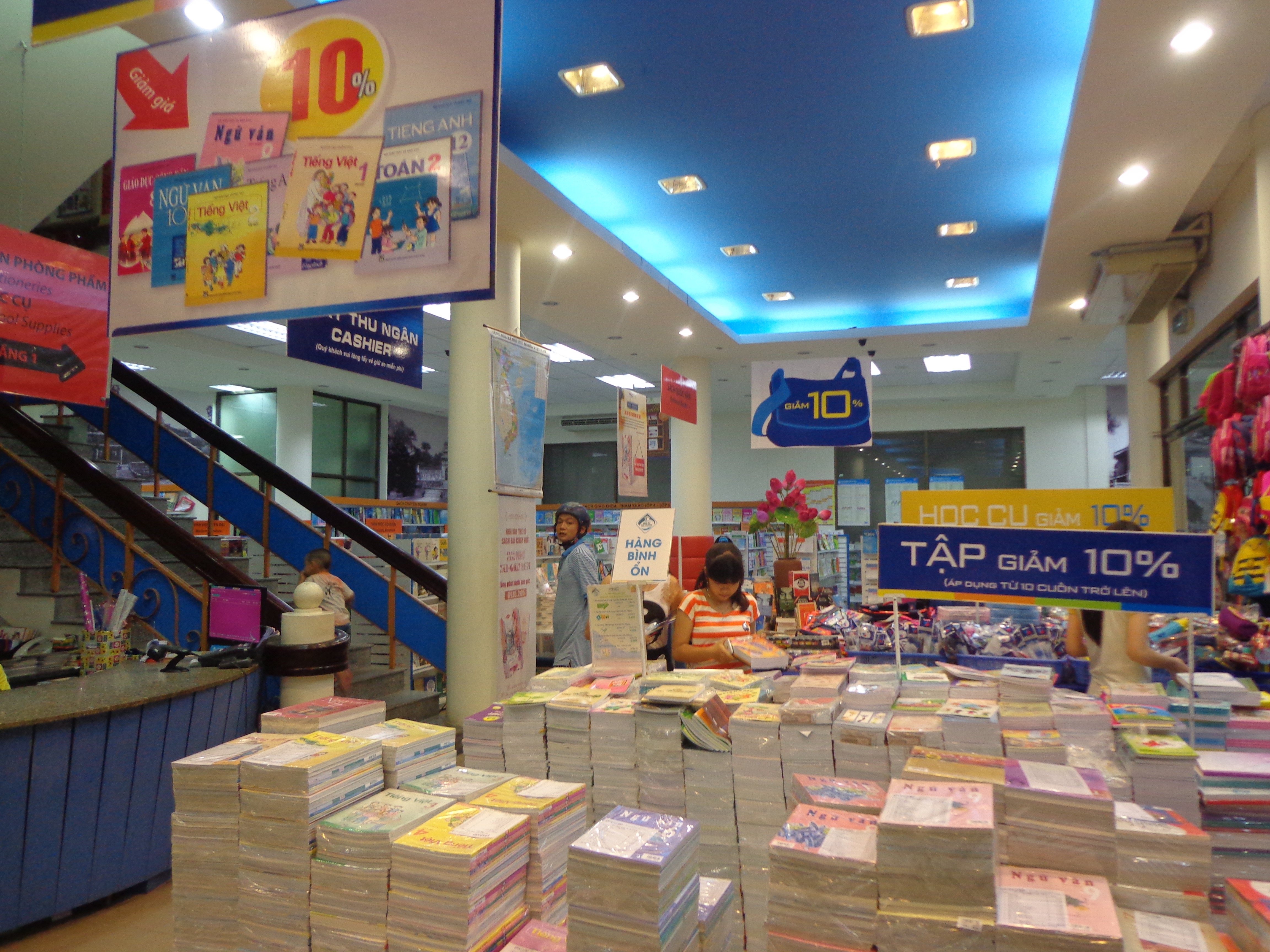 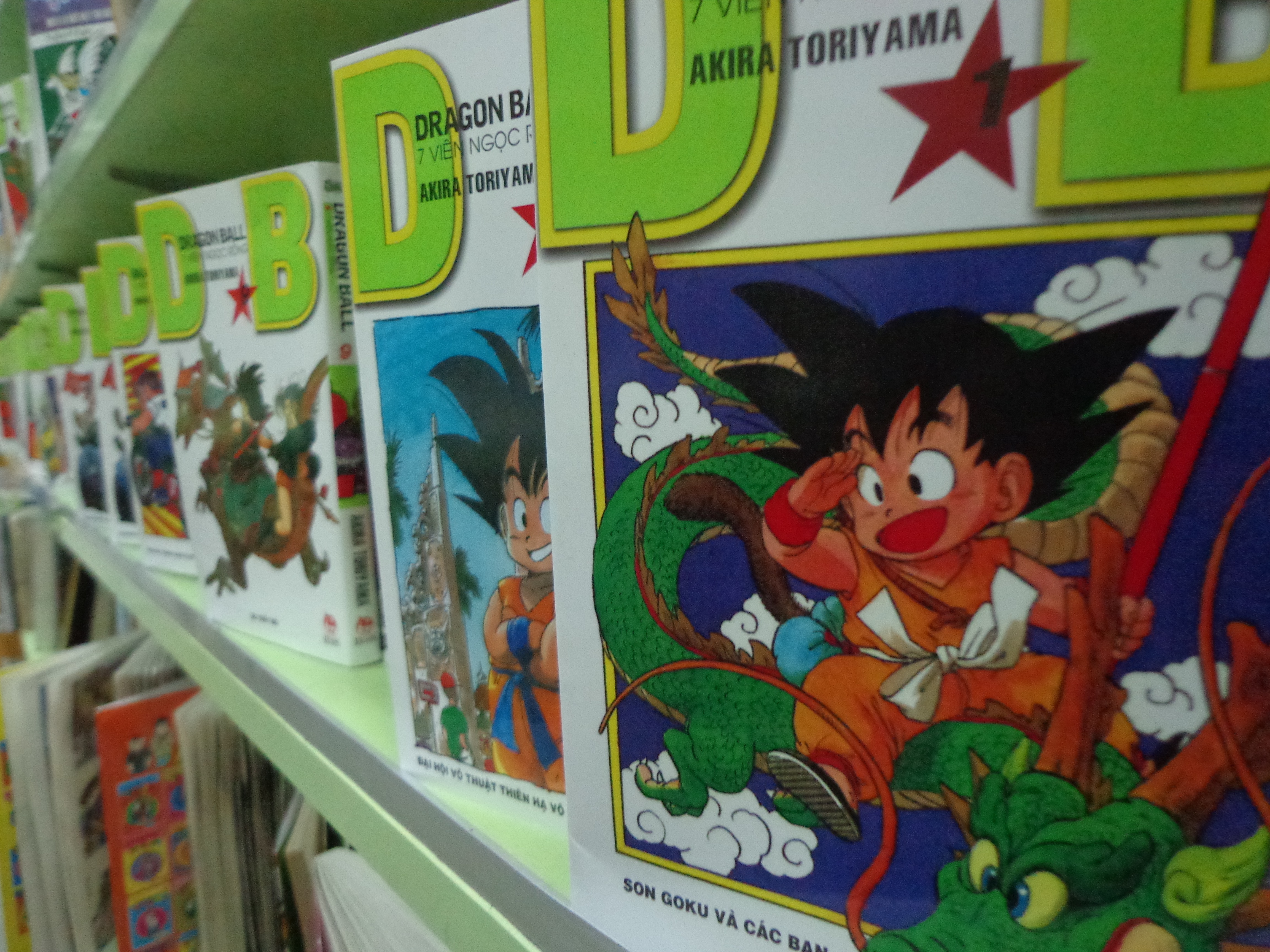 An entire aisle was dedicated to Dragon Ball. I bought the first volume in Vietnamese. 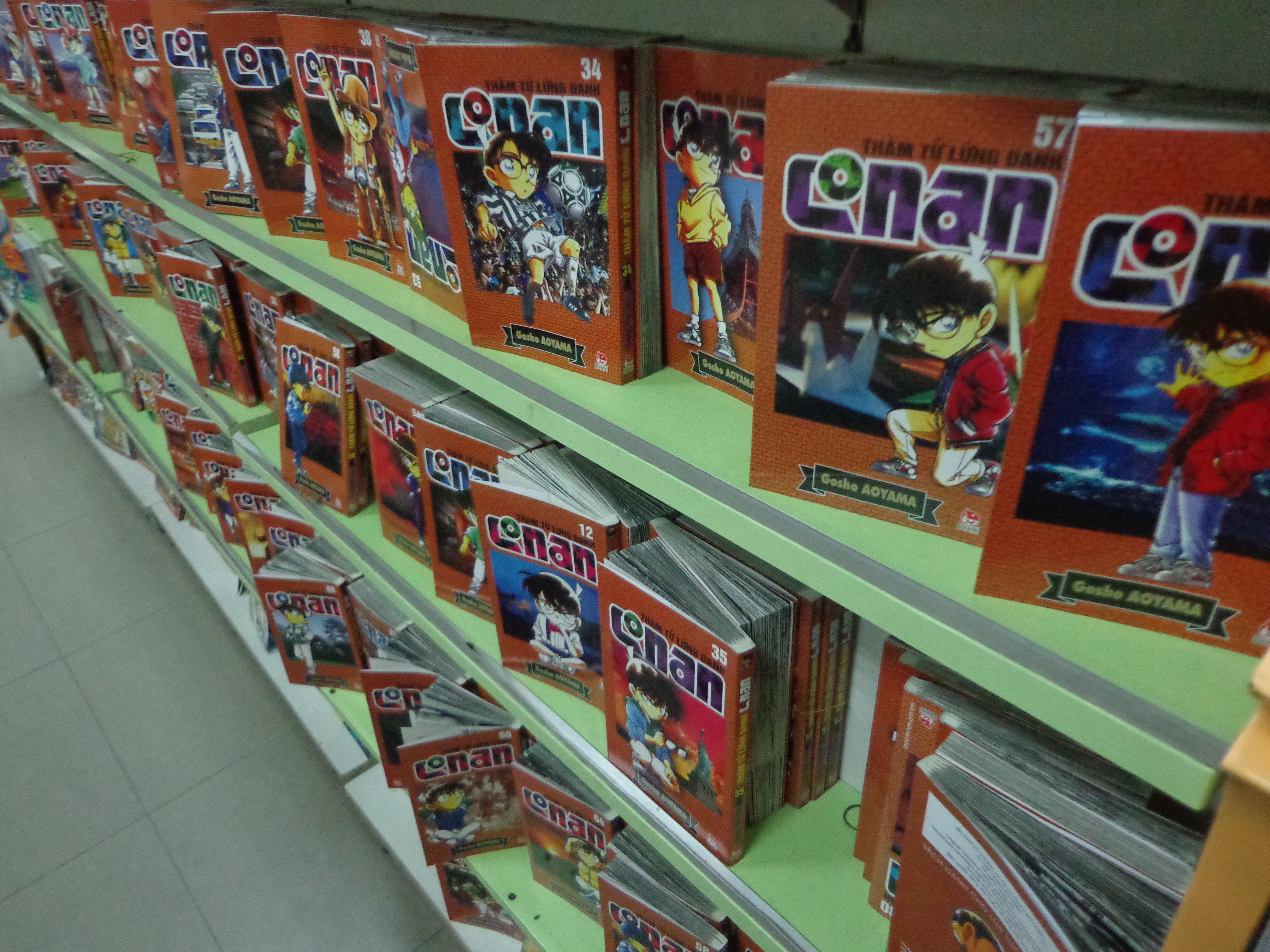 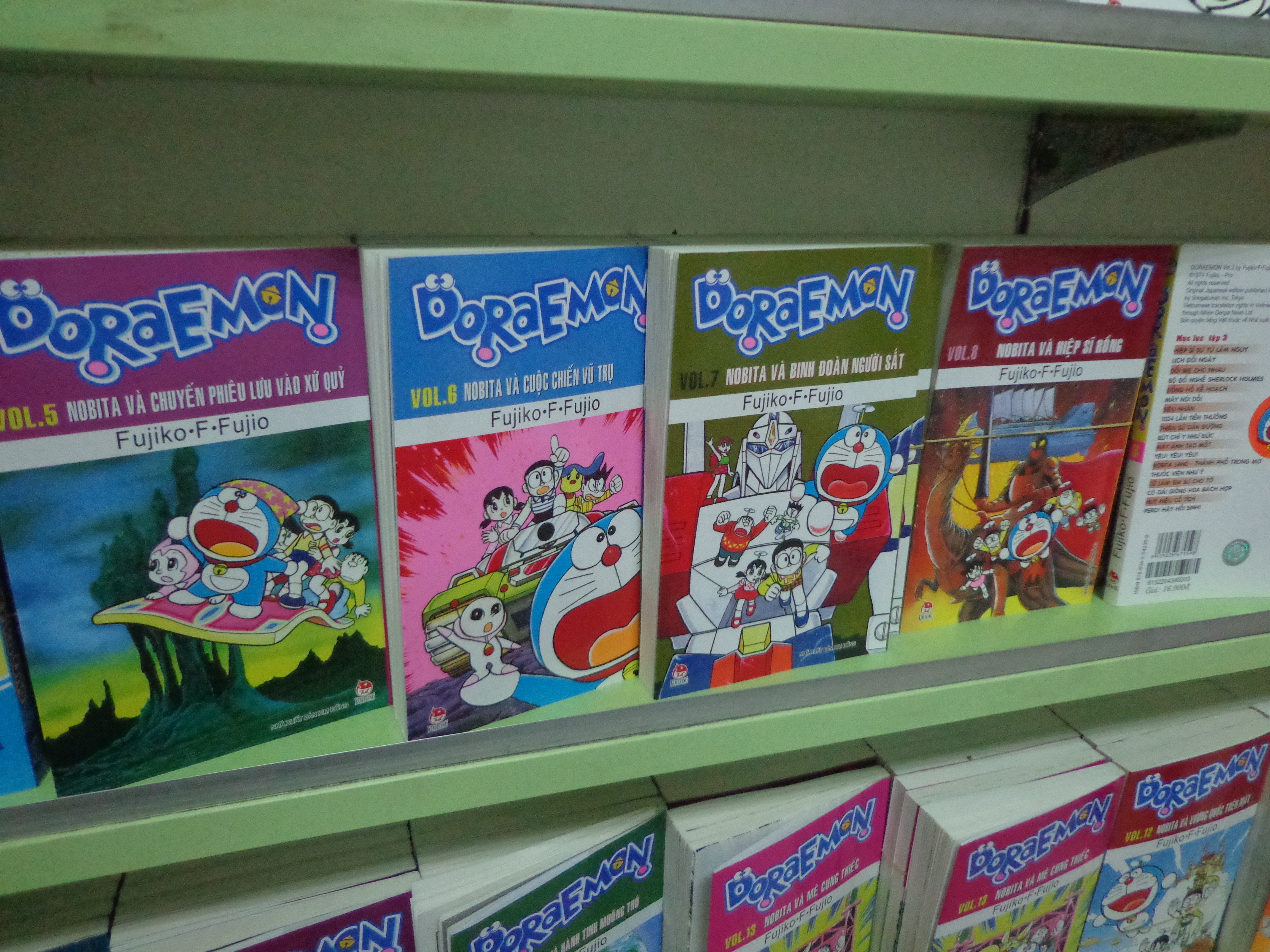 Unable to locate any Tintin titles (the signs in Vietnamese did not help), I searched for a picture of Tintin and showed it to an employee. He instantly recognised the image and asked, “Tintin?”

I nodded my head and added, “Vietnamese.”

He disappeared and did not return for 15 minutes. I sat down to have some coffee instead (They have a nice coffee shop and a reading area). When he returned he had two books with him, The Broken Ear and The Valley of the Cobras. The latter is not a Tintin album. Yet, the publisher had put a Tintin and Snowy logo on the top left corner. I picked up the former and bought it for 17k VND – that’s less than 1 USD and less than 50 INR! 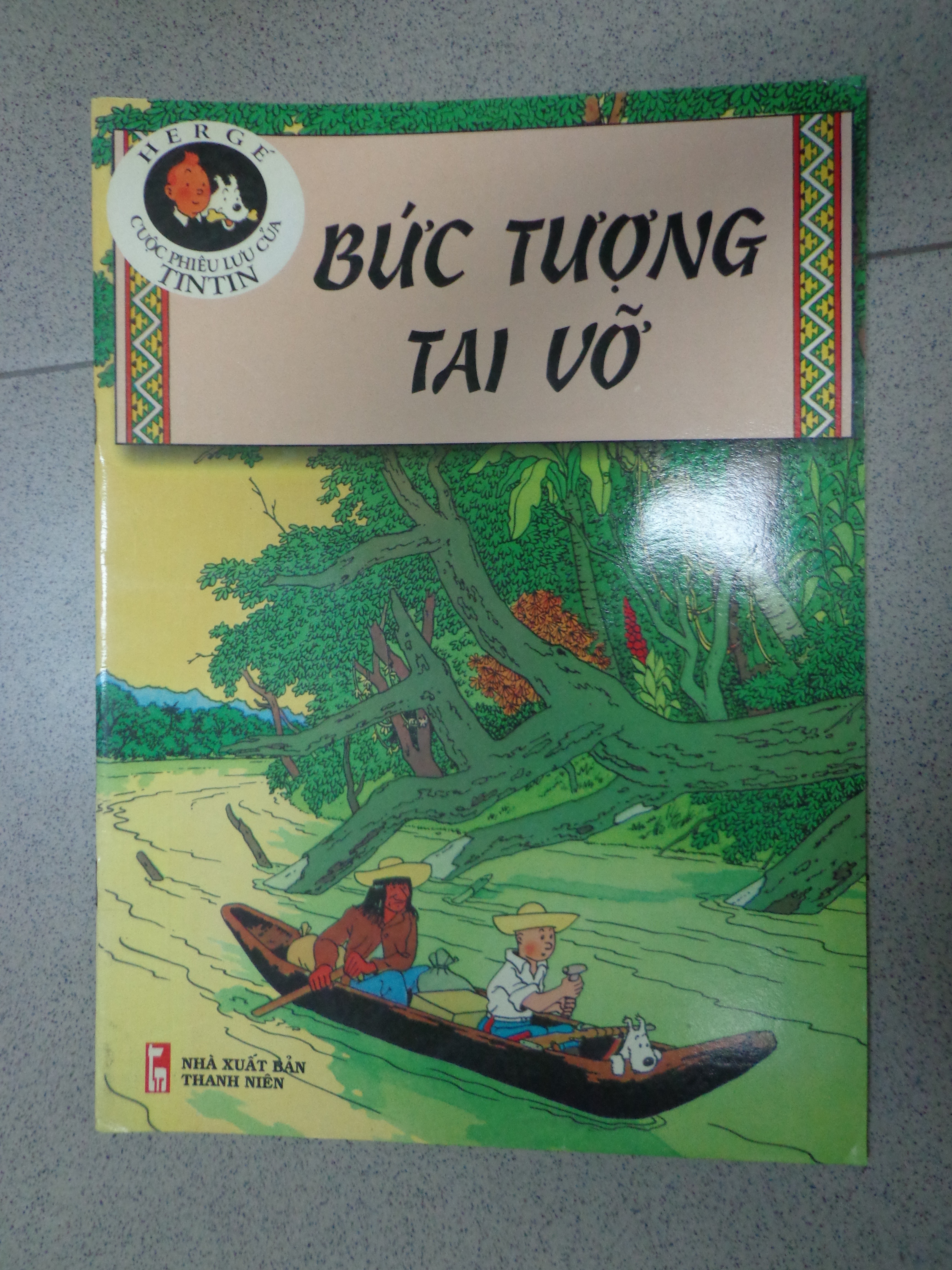 I placed the book on the floor and took a snap.

The album is published by Nhà Xuất Bản Thanh Niên which roughly translates to Youth Publishing house. The album uses a saddle stitch binding rather than the perfect binding with four signatures found in Egmont editions.

The cost cutting is most evident in the quality of paper chosen. Considering the fact that this book was published in 1996, I must compare it to a Methuen edition or its Magnet / Mammoth imprints. Although I don’t have one readily available with me, I am certain that the pages used by Methuen, even with their paperbacks were thicker than this Vietnamese edition. In fact, the pages are so thin that a line or text on page 5 is revealed through whitespace in page 3 and 4. The thin paper with whitespace on both sides shows the content of the next to next page.

The editions are definitely taken from any of the earlier Hyslop English editions. The text panels have been meticulously replaced with Vietnamese text using a much more traditional method of spatula knife cuts. In speech balloons with text and sound effects, the original prints of the sound effects have been retained. Check the circular panel. The sound effects (musical notation) of the speech balloon are retained from the original Hyslop edition.

There are pages where offset plate misalignment for CMYK plates are visible. This wasn’t the case with the Methuen books I had read back in 1996. However, the initial run of prints from Ananda Publishers in Bengali suffered from this issue. In 1996, Ananda Publishers used a thicker paper for their print but they used the dreaded glue binding. The misalignment of CMYK plates are most evident on this page. It is also evident that the source was not the original CMYK plates as the black lines are composed of the four colours and do not have a dedicated K plate.

The back cover lists all the titles that were published by then. I doubt if it is easy to get them nowadays. The catalogue of Tintin albums available at the time of its publication.

I was more surprised to find only one album from each of the three double albums on the list. There is Destination Moon but no Explorers on the Moon, Prisoners of the Sun but no Seven Crystal Balls and Secret of the Unicorn but no Red Rackham’s Treasure. However, a quick search at tintinologist.org revealed that Vietnamese editions of these missing albums were indeed published.

I had later visited a lot of Souvenir shops and have always come across canvas hangings, embroideries or photo prints with images like this 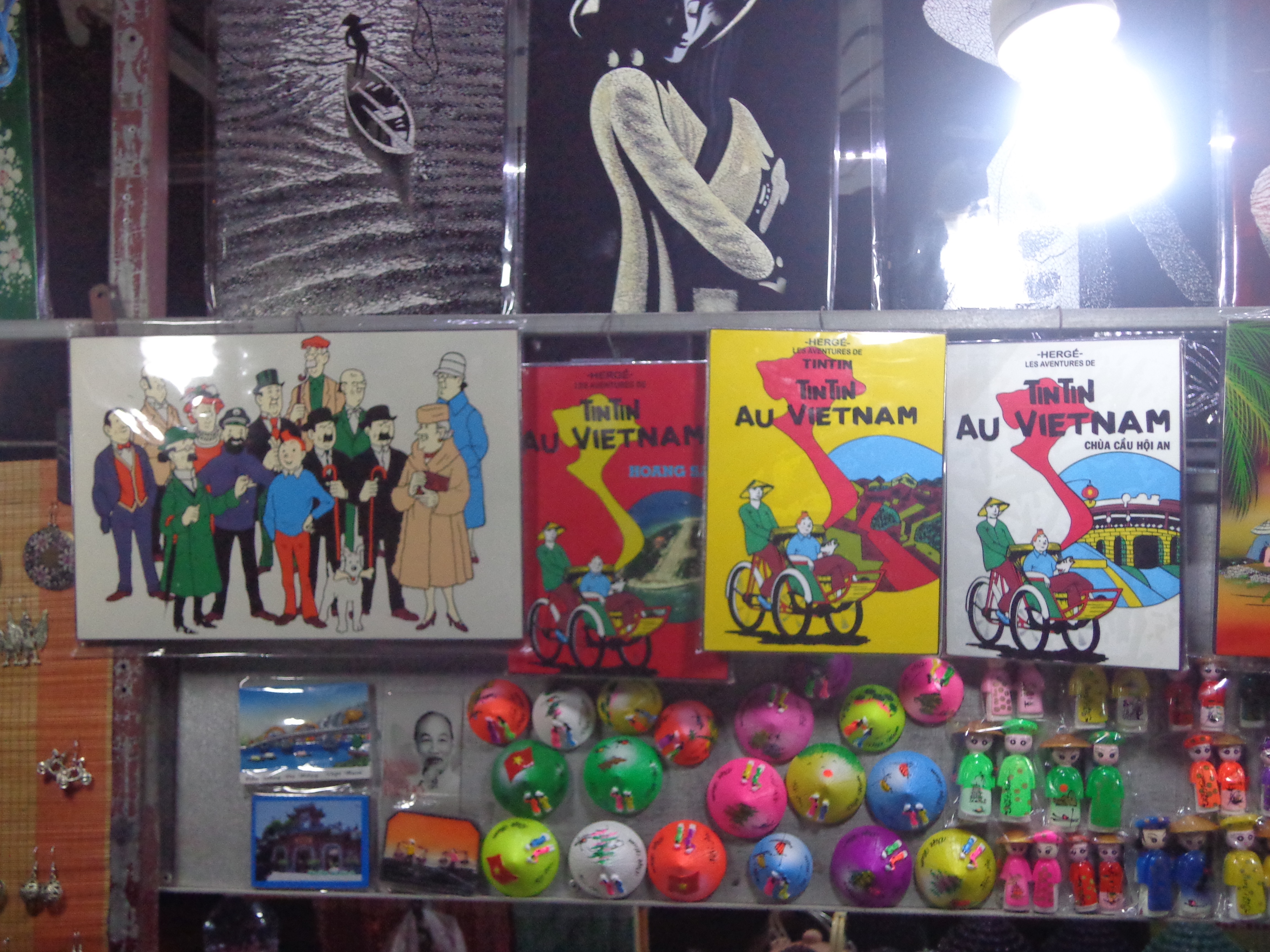 Even if Herge had not sent him to Vietnam, the Vietnamese people have brought him to their land.

Communist Chess: A game of 11 rules
A food trip to Mosque Road in Bangalore